Possibly the most fascinating, if not the most instantly attractive work on this CD of music by Stephen Dodgson (1924-2013), are the Three Winter Songs for Soprano with Oboe and Piano (1972).  Soprano Robyn Allegra Parton is supported by oboist James Turnbull (he plays in all the other items) and pianist Libby Burgess (she plays in all but one).  The vocal parts are on the atonal scale but accomplished brilliantly by Robyn Allegra Parton.  She is quoted in the accompanying programme note as having ‘clear high tones and clean, flowing coloratura’ (Online Musik Magazin). Yes, absolutely!  Her performance sells the texts of the three poems at stirring full value.  They are: ‘Birds in Winter’ by George Crabbe, ‘Winter the Huntsman’ by Osbert Sitwell and February’ by Hilaire Belloc, wonderful picture poems.

The oboe and piano accompaniments, more atmospheric than atonal in their impact, add a marvellous patina of colour to the pictures painted by the words.  The climax of the final song brings the idea of the sun bringing an end to Winter. The effect in voice and instruments is magical. 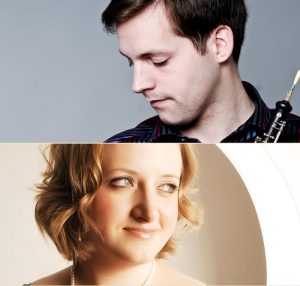 The CD opens with Dodgson’s Sonata for Oboe and Piano (1987). It has six movements all of them spiky and angular with leaps for both oboe and piano.  This results in an invigorating freshness.

The first of four movements of Countdown: Suite for Oboe and Harp (1990) with the harp played by Eleanor Turner was composed to celebrate the 90thBirthday of the Queen Mother.  The other three movements especially Burlesque (‘Counting money’) have a delightful sense of humour.  The combination of harp and oboe works superbly well.

The Sonata for Cor Anglais and Piano (1967) also features fine performances by James Turnbull and Libby Burgess although the woodwind writing is surprisingly similar to what Dodgson does with the oboe.

For me, the most immediately attractive work was the final one on the CD, the five-movement Suite in C minor for Oboe and Piano.  There is a delightful sinuous Arabesque and an attractive Romance which allows a more melodic style.  The finale is once again spiky and full of life, bringing out the very best of Turnbull’s oboe virtuosity.