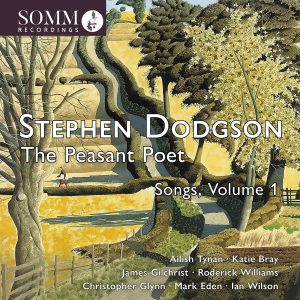 Some of you may remember Stephen Dodgson (1924 – 2013) presenting parts of Radio 3’s Record Review and other programmes back in the day but little did we know then that he was a prolific and versatile composer. There are at least a dozen discs out there which are devoted to his music, now we have the songs, and encouragingly, this disc is given as volume 1.

Another excellent aspect of this disc is that we have a wide variety of star-studded voices adding interest throughout with the guitar (for which Dodgson was brilliant at writing) in the Four poems of John Clare the only work previously recorded, and recorder in the witty The Monk and his Cat. In all there are 26 songs here and that includes five cycles and these are, attractively, divided between the voices.

The texts, which are all provided, stretch from light verse such as Ms. Hen, a nursery rhyme, through Gerard Manley Hopkins as in Heaven-Haven and Walter de la Mare with Five Eyes, to Ezra Pound with the four fine songs which make up Tideways. Generally, the mood of a song is controlled by the imaginative material heard in the piano or guitar writing, but not always does Dodgson plumb the real meaning or the or the depths of a poem. I feel this especially in his setting Manley Hopkins Inversnaid with its famous lines about ‘wildness and wet’, and ‘long live the leaves’ and in the setting of Ben Jonson’s Slow, Slow Fresh Fount.

The most significant work on the disc are the six songs which constitute the Bush Ballads (Second Series) concerning Australia beginning with ‘Farewell to old England’, a 19th century poem set almost in a music hall style, and later a more comic song about the Queensland drought and a priest named Holy Dan. All highly original in concept and execution and eclectic in style as the texts require. But if you are able to sample a few tracks I would recommend the four settings of James Campbell (d.1987) which make up Irishry as they incorporate both drama and wit.

There are two essays, a biographical one by Robert Matthew-Walker, and another describing the songs in detail by John Warrack. Dodgson’s style and language is neatly summed up as ‘a tonal-based inspiration and a natural creative communicative desire’, although Matthew-Walker does add that Dodgson clearly has his own personal voice. And, one must agree with him that Dodgson has been ‘unfairly neglected’.