A gratifyingly insightful and complimentary review of the Stephen Dodgson ‘Complete Music for Cello and Piano’ by Jonathan Woolf in this month’s British Music Society newsletter:

“Since Stephen Dodgson was fond of the medium of chamber music and as he wrote so well for the voice it’s not surprising that his cello works should be so infused with lyric-vocal qualities. The Cello Sonata of 1969 shows a fine conception of equals in a clearly structured three-movement work that reveals echoes of Bartókian Nocturne and a spare call-and-response between the instruments. There’s a certain refined introspection to Dodgson’s writing and an element of allusion but he doesn’t skimp the cello sonata’s voyage to a hard won (but not triumphalist) victory. 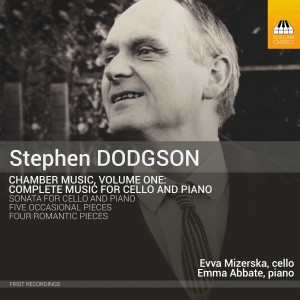 The Five Occasional Pieces followed in 1970 and the composer himself instructed that they are for cello ‘with piano’ and not therefore duo works. The second piece owes an acknowledged debt to Debussy whilst the fourth piece, an Aria, has long-breathed lyricism at its core – but with a colour-conscious role for the piano too – and hints of Eastern European keening in the cello’s song (not for nothing did Dodgson so much admire Janáček). His gift for vitality can be savoured in the Alla polka, here an ingenious and infectious swaying dance. There are four Romantic Pieces, divided into two sets of two through the disc, that expertly reveal the playful, lyric, and quintessentially Dodgsonian long romantic lines that mirror his gifts as a melodist of resourcefulness and warmth. The performances reflect those qualities too in the slightly enveloping acoustic of the Church of St John the Evangelist in Oxford. The booklet notes by John Warrack are in Toccata’s best tradition.”