Fresh from an investigation of Stephen Dodgson’s richly imaginative Inventions for Harpsichord, Naxos turns its attention to his chamber works with guitar. It was on the advice of Julian Bream – who premiered the Suite for Guitar in 1952 – that Dodgson turned to the instrument and wrote a long sequence of music that continues to beguile.

Therefore it’s of considerable interest that this is the premiere recording of Change-Ringers, a free adaptation for four guitars of Carillon (1967) which was written for two harpsichords. The delightful play of metres and colours is a constant delight, whether in fast or slower tempi, and the performance by the Mēla Guitar Quartet, almost constant companions throughout the disc, is splendid. Roundelay sees the cello’s expressive lyricism cast against the guitars’ conversational playfulness in a lithe and engaging performance. Evva Mizerska has already distinguished herself on disc before, in Dodgson’s music for cello and piano on Toccata.

Cast for violin and guitar ensemble, the Divertissement is a seven-movement piece composed in 1984. Apart from the opening Sinfonia, the movements are all dance-predicated. There’s a somewhat elusive, stalking Musette, a rather beautiful and wistful penultimate movement called – a touch gnomically – ‘Wherever next?’ and to finish an occasionally impish Rondo with stomping vitality, rhythmic displacements and a brief though charged lyric segment. As with Change-Ringers, the Mēla Guitar Quartet plays the Intermezzo which has a slightly troubadour profile. They support soprano Antonia Gentile in Hymnus de Sancto Stephano, written in honour of Hungary’s patron saint. Linked by ritornelli this is beautifully written for the voice and moves between thoughtful and lively quatrains. The Four Poems of John Clare were written for Wilfrid Brown and John Williams. This has its quirky and athletic contrasts, as befits the poetry but the apex of the four is the portrait of Clare himself in The Peasant Poet – reflective, interior, slow and sensitively shaped. Gentile has the almost boyish purity of expression for this set. Finally, there is The Selevan Story for the interesting combination of flute, violin, guitar duo and guitar ensemble. Based on the legend of St Levan this five-movement piece has bardic elements and a pretty fair representation of the argument between the Saint and his neighbour Johana: the saint incarnated by the harp, the scolding neighbour by the other instruments. The beautiful unhurried tread of the guitars sits at the centre of the work in the Pastoral, though there’s some Bartókian influence in the dance of the penultimate movement, one feels. The last, and longest, movement tells the grimmest story but ends consolingly.

The performances are unfailingly eloquent and textured and the fine booklet note from Graham Wade also has full texts. It’s good to know that Dodgson’s music continues to generate such enthusiasm in performers and, I’m sure, listeners alike.

Jonathan Woolf
British Music Society
The launch concert for this CD is on 3rd November at St James’s Piccadilly, London. 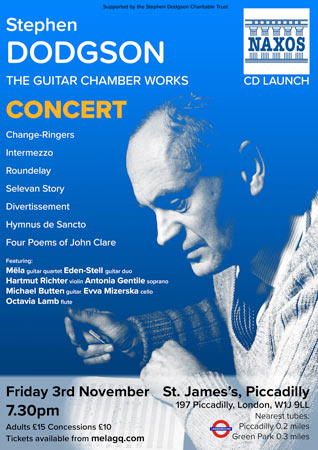