by Leonora Dawson-Bowling
oboe, piano
Comments are off 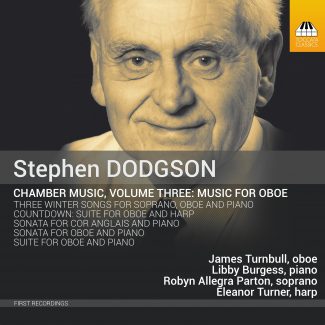 This survey of Stephen Dodgson’s oboe music, which is part of an evolving Toccata series devoted to his chamber works, covers a period of over three decades. The earliest piece is the Suite in C minor for oboe and piano, composed in 1957 and cast in five taut movements. As ever, Dodgson’s ability to write song-without-words slow movements is pronounced here, notably in the lovely Arabesque, as is the slightly jazzy Scherzino in which loquacious exchanges and good humour are uppermost. Balancing this against a lyrical Romance ensures a just expressive quotient in a piece both attractive and accomplished. A decade later he wrote a Sonata for cor anglais and piano and James Turnbull and Libby Burgess rightly take the Andante con moto instruction in the first movement at face value, vesting the music with an urgent lyricism. Dodgson was especially drawn to Bartók but I thought more of Martinů at a few brief moments  in the fast second movement  before he introduces another of his tightly conceived slow movements: he invariably ensures enough grit to stop things becoming predictable.

The Sonata for oboe and piano (1987), cast in six brief sections, opens with a skittish fanfare Intrada, and takes in an eloquently long-breathed melody in the Grave movement where supportive piano chording  is apposite and sensitive. The Aria e Ciacona finale  enshrines the songful lyricism of the former with the playful iconoclasm of the latter. A delightful envoi. In 1990 Dodgson wrote Countdown which he subtitled a Suite for oboe and harp. There is plenty to count here: candles, sheep, money and your blessings. The candles movement was a Salute for a Royal Birthday (the Queen Mother’s 90th), a Nocturne promises lyrically-inspired sleep, whilst the Burlesque, a Scherzo in effect, suggests innocent high spirits in the counting of money rather than avarice. In 1972 he wrote Three Winter Songs for soprano, oboe and piano. These are settings of George Crabbe, Osbert Sitwell and Hilaire Belloc (the three texts are printed in the booklet, and indeed one can see how Dodgson amended Crabbe’s Birds in Winter from The Borough – the basis of Peter Grimes of course).  Whether descriptive or more pensive – whether evoking the hunting horns of Sitwell’s Winter the Huntsman or the fin de siècle shifting moods of Belloc’s February – these are idiomatic and characterful settings.

The performances are uniformly good and are led by James Turnbull, an adroit and expressive instrumentalist, and one can’t go wrong with sleeve notes by Lewis Foreman. Toccata’s Dodgson series continues to produce first class performances of beautifully crafted music.

This recoding is available from Toccata Classics