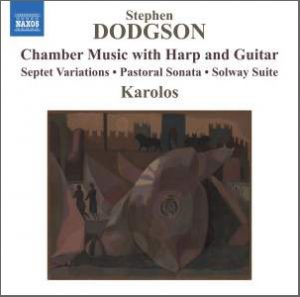 Karolos continues to champion the music of Londoner Stephen Dodgson (1924-2013) for Naxos. Previously it was String Trios, each player also getting a solo. Now that ensemble is augmented by flute, harp, clarinet, guitar and a second violin.

All but the guitar take part in Septet Variations (1975), an immediately arresting piece with a soundworld that cannot escape Ravel’s Introduction and Allegro and finding Dodgson’s invention just as delicate, imaginative and finely crafted as the Frenchman’s; and, given the title, wide-ranging. Pastoral Sonata (1954, revised a couple of times) – flute, cello, guitar – initially weaves magical illusions, whereas sadness beckons in the central ‘Elegy’ and is airily eclipsed by the final ‘Carnival’. Solway Suite (1974, flute, viola and harp) once again demonstrates Dodgson’s impeccable credentials for creating haunting melody, pastel colours and agreeable illustration, and for varying moods.

Echoes of Autumn (1998) finds Sarah-Jane Bradley and Craig Ogden making a virtue out of viola and guitar togetherness, while Sonata for Three (1982) adds a flute to that combo for music of capricious intricacy. Finally, there is titular capriciousness, the earliest music here, from 1952, Capriccio and Finale (for a sextet without second violin and a guitar), generously expressive and lively, numerous Dodgson hallmarks already in place in readiness for later delights.

Given the top-notch gallery of players, it is only necessary to relate the excellence of the performances, individually impressive and with meaningful interaction, and the recording captures every sound and nuance.