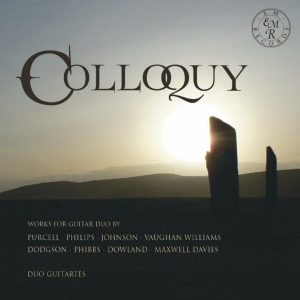 Life in Elizabethan England might have been ‘nasty, brutish and short’.

But on hearing the music of Peter Philips, his Pauana dolorosa Tregian from the Fitzwilliam Virginal Book, John Dowland’s two movements from ‘Lacrimae’ and two pieces by court composer John Johnson, it seems that life in those days certainly had some compensations.

We are also treated to a beautiful arrangement of Vaughan Williams’s ubiquitous Greensleeves, popular throughout 16th century England, played so warmly and elegantly by these two fine guitarists Anne-Kathrin Gerberth and Bernhard Dolch.

The two pieces by Johnson were, originally, for lute duet – where one is more likely to encounter them on CD. One is a set of variations on Greensleeves, composed some four hundred years before VW’s – a nice link.

The other early works are not ‘proper’ guitar music, such as the Purcell Suite (normally printed as No 2 in G minor for keyboard) which opens the programme, but everything works so fluently and naturally that you might think that a long lost manuscript of guitar duets by Purcell had turned up.

Arrangements of these pieces have been made by the two performers and mostly the hands of the keyboard have been divided so that the bass parts are in one guitar, often transposed up an octave and the treble, right hand part, on the other.

It is good however to have represented three modern works especially for the guitar duo combination, by Stephen Dodgson, his Promenade, Peter Maxwell Davies’ Three Sanday Pieces of 2009 which have been arranged from piano pieces, and constitute one of Max’s more listener friendly compositions, and the premiere recording of Serenade, a succinct three movement suite by Joseph Phibbs, the middle movement of which is a Corrente, the same dance as is found in the Purcell Suite.

Colloquy, of course, means conversation and Phibbs’s delicately beautiful Serenade is just that, so where one guitar ends another begins, as it were, and this produces a true sense of ensemble, from the pen of a young and highly polished composer.

The same comment also applies to the longest work on the disc, Dodgson’s Promenade. This is mostly contrapuntal and energetic but with some delightful, lyrical moments making it varied and captivating throughout.

The disc comes with an excellent 26 page booklet, full of photos and details of the works, also composer biographies, written by a variety of hands, making this release quite fascinating and pleasingly refreshing.