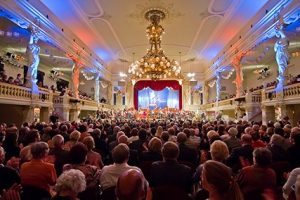 Theater Plauen-Zwickau – a ‘Very British’ concert with Stephen Dodgson’s Guitar Concerto No. 2 alongside works by Elgar and Vaughan Williams

On the 3rd and 4th November, Lucian Plessner and the Philharmonisches Orchester Plauen-Zwickau performed Stephen Dodgson’s Concerto No. 2 for Guitar and Chamber Orchestra, a work very close to his heart. Here he tells us more about his experience and the back story of the concerto.

“I don’t remember exactly which year the CBS Masterworks record featuring Stephen Dodgson’s 2nd guitar concerto was released with John Williams and the ECO under Sir Charles Groves. I asked Sony, but they couldn’t find out either. It must have been in the late 1970s or early ’80s. I do remember very clearly though  that my copy didn’t stay on the shop’s shelf for long but was quickly taken to my house and often played three or four times repeatedly. I was stunned. This concerto proved the guitar to be a top rank solo instrument in the world of classical music – this piece could absolutely compete with the great violin or piano concertos. I was a student at around 20 then and had no idea where the guitar would take me, but my ambition to be the soloist in this work was born.

It was John Williams then who helped me to contact Stephen Dodgson (thank you John!). So I called Stephen and he provided me with a wrapped parcel containing the orchestra score, piano reduction, solo part and in addition a string quartet with guitar, all originals in his hand writing. The full score of the concerto was full of a conductor’s pencil marks. I assume it served either for the premiere with the Hallé Orchestra, Manchester, or the recording with the ECO.

Much much later, in 2012, I eventually met Stephen and we went through his two guitar concertos. Stephen generously recommended me as soloist in the pieces, which I hoped it would help to launch the concerto to the stage. Possibly it did. 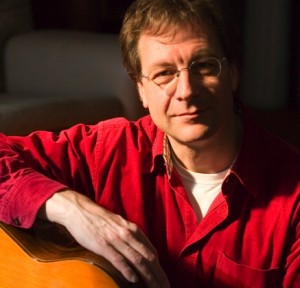 Interesting and fascinating is the development you can detect between Stephen’s two guitar concertos. The first concerto follows the conventional three movement pattern, and it is certainly inspired by some grand solo-concertos, mainly, I think, the Sibelius violin concerto, with its quiet floating opening of the strings and the solo instrument subsequently entering with simple long notes at the beginning, then building up long melodic lines, as well as rhythmical patterns – both recalling the nature of violin bowing. The second concerto speaks a totally different language by revealing the guitar’s unique characteristics and potential like no guitar concerto did before. You cannot imagine this piece being played by any other instrument. Not the violin, not the piano nor any wind instrument would work convincingly with this piece. There is no other inspiration leading the composer’s quill but the guitar itself. This piece is GUITAR, guitar at its best, sophisticated but typically guitar. This concerto displays more of the guitar’s unique idiom than the Aranjuez concerto does.

Of course Stephen was privileged when he wrote the piece: he had John Williams! John’s career had reached its peak. He was still young but already internationally acclaimed. He had worked with some of the great conductors and record companies. He had made a name of himself in the international music world. This kind of success and reputation must not be underestimated. It gives a talented musician the necessary self-esteem which encourages him to follow his own path, to do things his way. John wanted to go his own way. He had separated from his teacher Andrés Segovia’s style, which tended to stop a little here and a little there simply because the d-sharp on the third string sounds so nice, making ensemble work difficult. John had worked with chamber musicians and orchestras, he had decided to participate in the international symphonic game, and so had focused on the necessary requirements as a musician. Not to forget the fact that he was a guitarist of then unknown technical ability. It is obvious that Stephen was inspired by John’s guitar playing. By the way I do believe that apart from rescuing Agustín Barrios’ legacy (which had by then disappeared in limbo), showing the world that guitar concertos are a substantial part of the symphonic repertoire may be seen as John’s greatest merit, last but not least with the recording of this concerto. 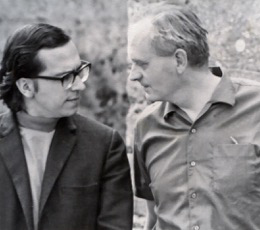 Stephen Dodgson (right) with John Williams (left) for whom he wrote Concerto No. 2

Working as a guitarist on Stephen Dodgson’s 2nd guitar concerto, you feel how much of John Williams’ personal and technical preferences are included in this piece. Stephen wrote for John. There are many examples in our music history where a composer wrote for one particular soloist and the concerto became a masterpiece. The same applies here. Unlike the first concerto, here Stephen also leaves common patterns aside and does things his way. He leaves the three-movement pattern aside and moves to five. He leaves aside the approved dialogue form of guitar and orchestra interchanging the leading parts in order to avoid the guitar being drowned by the orchestra. Stephen chooses exquisite instrumentation like two oboe d’amores, harp, marimba and glockenspiel, all of them instruments which add a specific colour to the sound of the guitar, extending its acoustic spectrum. He switches from symphonic orchestration – movement 1, 3 and 5 – to chamber music in the movements 2 and 4, from Stravinsky-ish rhythmical structure to lyrical and poetic chamber music when the harp or the glockenspiel play along with the guitar. The third movement with its 9/8 – 7/8 – 5/8 – 2/4 etc. rhythmical figures (Stravinsky!) is a beautiful example of the art of composing. The movement resembles a renaissance dance with light and joyful steps, while a masculine bass emphasizes on heavy beats, the guitar commanding the entire movement, interacting with virtuoso figures and rasgueados, continuous long phrases – great composing. And great fun to play! All this creates a solid, complex but complete sound and forward drive, which stands convincingly on its own. Multiple facets, but one organic movement. One couldn’t do this on another instrument. The orchestra instrumentation from brass to glockenspiel is unique and so skillfully chosen that it delivers a full symphonic sound, unusual for a chamber orchestra, but one which never covers the guitar.

As sophisticated and demanding as the piece might be, for the guitarist and the orchestra, Stephen shows his skills also in a very practical aspect, acknowledging the usual conditions when realizing a performance. With only one orchestra rehearsal, only one rehearsal with the soloist and a run-through as it is common practice in the music business these days, a good orchestra can get the piece ready for performance. When they’re good, of course – but you have to be good. Stephen knows exactly what an orchestral musician needs and what he or she can accomplish in a short time.

This 2nd concerto is my favourite piece for guitar and orchestra. It gives you so many true full and profound things to do as a musician, together with all the sounds and different ensembles you create together with the orchestra – it is pure joy. And not only that. In my opinion this work also marks a milestone – that of Stephen finding of an unmistakable position in the modern British music world, alongside Edward Elgar, Benjamin Britten and all the others, in affirming an autonomous, authentic and distinctive composer’s mind.

To my knowledge our performance was the first performance of the piece since its premiere with the Hallé Orchestra Manchester in 1974. We were all a bit nervous, but that’s natural. You go on stage totally inexperienced. Neither the conductor, nor the orchestra, nor myself as soloist had performed the piece before. But we were all happy in the end. This extraordinary composition had reached the ears of nearly two thousand people and was well received.

Lucian and the Philharmonisches Orchester Plauen-Zwickau receive heartfelt applause after their performance of the Dodgson Guitar Concerto No. 2

If I can attribute an artistic quality to myself, it might be the one that I am never satisfied with my own playing. Here too, I don’t think that my playing drew even with Stephen’s achievements. So I long for more opportunities to play this piece. Besides that, my immediate hope is that this concerto makes its way back to the international music arena and finds the recognition it deserves. Now that it is published it might become easier. All guitarists ought to take a close look at this concerto. And listening to John’s recording every now and then – John’s playing is so precise! – I can only say: Congrats! To both of you. And thank you so much for what you have done.”