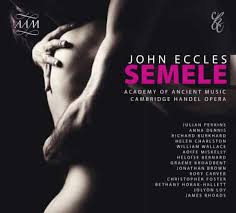 No lives were lost when the theatre wars triggered by the Italian insurgency caused the suppression of a memorable operatic treatment of the Semele story. It was a blow to the opera’s creators, William Congreve and John Eccles, our longest-serving Master of the King’s (and Queen’s) Music. What was left dead in the nest was English opera in its fledgling form.

Happily, a superb new recording of the opera has just been released by the Academy of Ancient Music, handsomely packaged with one of those trademark 200-page hardback books that alone are worth the cost of the set.

You won’t find here any of those show-stopping numbers for which Handel’s later setting of Congreve’s libretto is famous. Yet listening to so finely crafted a work, you can easily understand why many believe that its demise helped deny our literature-rich land its own bespoke operatic tradition.

Some 250 years would pass before the tradition was re-engaged by Benjamin Britten. And not only by Britten. A 1970s chamber opera inspired by the remarkable life of a Suffolk labourer’s daughter has just appeared in a world-première recording on the budget-price Naxos label.

The in many ways exemplary Margaret Catchpole (1762–1819) was twice condemned to the gallows, and twice reprieved; a train of events triggered by her obsession  with seaman smuggler Will Laud, a troubling figure, later shot dead by a prison guard. Deported to Australia in 1801 but later pardoned, this – as it turned out – deeply charitable woman retains to this day a small but honoured place in Australian history.

The source of her story is Richard Cobbold’s widely-read biographical novel Margaret Catchpole: A Suffolk Girl. Rector of Wortham in Suffolk from 1825 to his death in 1877, Cobbold was a scion of the Ipswich brewing family for whom the girl worked. Indeed, it was Cobbold’s mother, in cahoots with the family doctor, who twice helped save her from execution – this in an age when social pressure could temper judicial rulings, rather than hysterically pre-empting them, as often happens nowadays.

Cobbold’s novel had numerous spin-offs, including two dramatisations and a silent film made in Australia in 1911. It was even in the mix in 1947, as E M Forster discussed with Britten ideas for his next opera. (They turned instead to Melville’s Billy Budd.)

What Britten passed over, a Suffolk arts society later commissioned. The text would be the work of Ronald Fletcher (1921–92), a professor of sociology at York University, who had settled in East ­­Anglia to pursue a successful career in writing and broadcasting. (His edition of Cobbold’s classic Biography of a Victorian Village had been published two years before the opera.) The music, meanwhile, would be by Stephen Dodgson (1924–2013), whose interest in Cobbold’s novel had been sparked some years earlier by Jane, his Suffolk-born wife.

An accomplished composer of songs, and instrumental and chamber music, Dodgson was a much-loved figure within the BBC. I knew him as one of the producer John Lade’s most trusted contributors to Radio 3’s Record Review, though it was his skill as a composer of incidental music for radio dramas that made the greater call on his time.

There is an echo of these radio-derived skills in Margaret Catchpole, where Fletcher’s expertly crafted distillation of Cobbold’s novel – available as a download on the Naxos website – is set by Dodgson to music that’s as telling as it is unobtrusive. It was much the same with Eccles and Congreve.

Several of our more perceptive critics suspected that Dodgson’s compositions went wider and deeper than any of us imagined. Margaret Catchpole ­– by far the largest of his works – confirms that suspicion.

Like Britten, he knew and loved the Suffolk landscape. Like Britten, he had the gift of needing very few instrument – Margaret Catchpole is scored for just 11 players – to paint pictures and distil moods. We hear this in the several richly imagined instrumental interludes, as well as in the way the Suffolk scenes take on an entirely different tint from those on the Hawkesbury River in New South Wales.

It’s by the Hawkesbury River, in a poignant recapitulation of the opera’s opening scenes on Suffolk’s River Orwell, that Cobbold’s tale reaches its idyllic close – an ahistorical end. Albeit one that conceals within it a larger imaginative truth.

The recording is conducted by Julian Perkins. Back on home turf, it’s he who conducts that dazzling account of the Eccles. Is there no end to these coincidences?