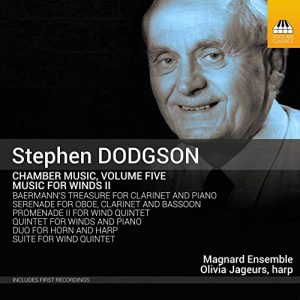 I greatly enjoyed the previous disc in Toccata’s series of Stephen Dodgson’s music. Chamber Music, Volume Five: Music for Winds I (review) had a lively and varied program, and this disc lives up to the very high standard set by that recording. Excellent playing and another varied program serve to show what a vastly underrepresented composer Dodgson was. The major labels seem to have ignored him. We must be thankful to the likes of Dutton, Naxos, Claudio and now Toccata for introducing us to a growing catalogue of his interesting and entertaining tonal music.

There is much to enjoy in the second volume of Dodgson’s wind chamber music, pieces composed between 1958 and 2004. It shows some interesting blending of timbre yet resolutely obeys Stravinsky’s neoclassical ideals. This is especially clear in the three works for wind quintet: a Wind Quintet, a Suite and a Promenade. The Wind Quintet from 1958 is the earliest work on the disc. Its two movements pack a great deal of contrasts, with the first movement developing from one note. Dodgson experiments with various combinations of oboe, clarinet, horn and bassoon. They all get equal opportunity to shine, and the piano writing is equally demanding.

The Suite for Wind Quintet from 1965 (strangely described in the booklet as being for a “Quartet”) was composed when Dodgson was appointed Professor of Harmony and Composition at the Royal College of Music. It can be seen as a kind of twentieth century tribute to the baroque suite. It begins, as all good baroque suites do, with an Overture. The flute replaces the piano, which giving Dodgson extra wind sonorities to play with. The result is quite splendid, especially in the Pastorale. The third work for wind quintet, Promenade II, began life as Promenade I for two guitars. It was arranged and recomposed shortly afterwards, in 1998 The “II” in the title reflects “its occasional substantive departure from the original version”. The work reflects the changing scenes and happenings that occur during a walk, including the sounds of birds and dogs.

The Serenade for oboe, clarinet and bassoon from 1959 consists of four short movements. It further experiments with wind sonorities. The result is very satisfying, as the instruments weave together in a more intricate and complex manner to create some tremendous three-part writing. One melody is challenged by a totally different one, even in the slow opening of the work.

Baermann’s Treasure from 1986 is actually an ‘Introduction and six variations on a theme by Weber’. The theme itself comes from a single line of music that Weber gave to the eminent clarinettist Heinrich Baermann, whom he called “his dear brother” despite not having any family connection. The work is more romantic than the others on the disc, yet Dodgson can still be seen to experiment: he explores the full range and character of the clarinet as he winds his way through the eight tracks that make up this work. This is followed by Baermann – the Sequel, written some nine years later. In a single movement, it contains more than one variation. It is intended to follow the erlier piece directly. It adds the original as once again it highlights the clarinet’s expressiveness, and acts as a coda that sums up the two works well.

In a way the most unusual work on the disc is the Duo for Horn and Harp. There is little repertoire for the partnership. Here it seems to work well. The work opens with a slow Andante contrasting the grand mellifluous tones of the horn with the playfulness of the harp; this is brought out fully in the wonderful final Moderato. This might be an unusual combination of instruments, but in Dodgson’s hands the result is delightful. It exploits the soulful sonorities of the horn and the playful fluidity of the harp.

The Magnard Ensemble has recorded another excellent disc. It highlights the skill and expertise of Stephen Dodgson the composer. This series of chamber music discs from Toccata Classics has been quite a treat. The two discs of wind music are particularly fine. The playing is great on both discs; this one is perhaps the finer. The variety of music on this disc, with its complex and varied combinations, has shown the Magnard Ensemble at their very best. This applies equally to the harpist Olivia Jageurs. They are once again aided by the beautifully engineered sound of the Menuhin Hall, warm and welcoming. There also are the informative and detailed booklet notes that introduce this music very well indeed. A wonderful and highly recommendable disc.