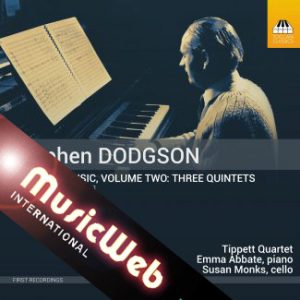 We are delighted to announce the imminent release (1st March) of the next Toccata Classics Stephen Dodgson recording: three quintets performed by the Tippett Quartet, Emma Abbate (piano) and Susan Monks (cello).

These three quintets continue the exploration of his chamber music on Toccata Classics. Dodgson’s musical language inherited something of Shostakovich’s irony, Janáček’s spiky energy and Britten’s polished clarity, occasionally reaching further into the past in passages of Purcellian dignity, all animated with a gentle harmonic warmth of Dodgson’s own. The result, in a typically English paradox, manages to be both elusive and direct. 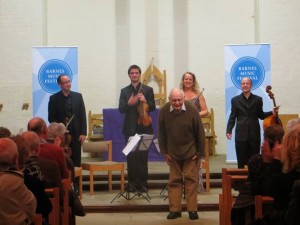 Stephen Dodgson with the Tippett Quartet in March 2013

Dodgson Quintets CD named a MusicWeb recording of the year