The Marian Consort on Dormi Jesu

At the end of last year, the pure but rich-voiced Marian Consort released their album ‘Music for the Queen of Heaven’. The album is a programme of contemporary Marian anthems – many of them commissioned by the ensemble – which celebrate a living, developing tradition where the new is always informed by the old, casting fresh, vital light on these ancient words.

Among other pieces, the group selected Stephen Dodgson’s beautiful carol Dormi Jesu. And in a Gramophone podcast interview in December, director Rory McCleery told us more. 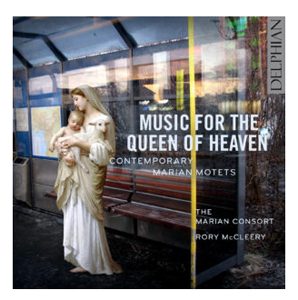 “We’re delighted that there’s at least one other world premiere which is this beautiful three-voiced carol by Stephen Dodgson. And Jane Clark… Jane Dodgson, Stephen’s widow, has been a supporter of the group for some time now and she’s been a wonderful friend of ours but also a wonderful advocate of Stephen’s music. And I was delighted when she presented me with some unpublished works, among them this incredible carol. And that’s one of the aspirations that we have for our CDs, I think, that  they allow this music, that for whatever reason, be it Renaissance or contemporary music, is perhaps not as well known. It allows that music to be brought into the public sphere a little bit more and hopefully inspires other people, other choirs, other choral directors, other singers, to put it into their concert programmes and to sing it… because I think it’s wonderful, wonderful music.

And certainly this carol by Stephen Dodgson is such a beautiful setting of the lullaby of the Virgin Mary ‘Dormi Jesu’ and it’s a really beautiful, touching miniature. So I was delighted that we were able to present the first recording of it here on this CD, alongside pieces that are perhaps much better known in the choral repertoire but which have a very special place for us like the Howells Salve Regina which is a work I’ve know since I was a boy chorister. So it’s fantastic to be able to bring that into this programme.”

Read the new Planet Hugill review of the recording >

And click the play button below to hear the full interview with Rory McCleery discussing modern Marian motets in the December Gramophone podcast.