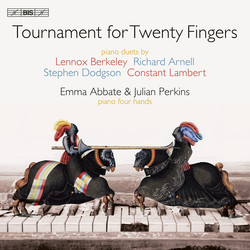 This enterprising collection takes its title from a two-part set of eight (mostly) miniatures by Stephen Dodgson. The first five unmistakably share the same childhood worlds as Fauré’s Dolly Suite and Debussy’s Petite Suite, whereas the remainder self-confessedly look to the Czech Republic for inspiration, climaxing in the enchanting A Bohemian Entertainment headed ‘To the memory of Antonín Dvořák’. Also included (another recorded world premiere) is Dodgson’s Sonata for piano duet, which (as Stephen Johnson points out in his exemplary notations) is closer to Britten.

Lennox Berkeley is represented by a Satie-esque Palm Court Waltz, an enchanting Sonatina (a stylistically haunting fusion of early Debussy and Poulenc), and a Theme and Variations (1968), in which the underlying French vibe is gently dissipated by passing harmonic angularities. Richard Arnell was another incredibly gifted composer whose refusal to toe the post-Darmstadt modernist line left him becalmed in a stylistic no man’s land. Today, the Bizet-like playfulness and Poulenc-ish harmonic puckishness of his four-hand Sonatina emerge as utterly enchanting. Finally, there are three pieces by Constant Lambert – an aubade, siesta and nocturne – of a gently Caribbean hue.

Captured in beguilingly immediate sound that creates the impression of Emma Abbate and Julian Perkins playing in your living room, this is a recording I have already returned to several times simply for the pleasure of hearing two players at the top of their game.