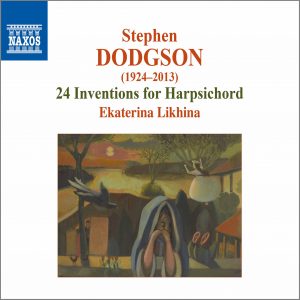 We’re very pleased to announce the release of the recording of 24 Inventions for Harpsichord by Stephen Dodgson (Sets 1-4), recorded by Ekaterina Likhina on Naxos.

For more about the Ekaterina’s style and approach, and the recording process, see the earlier blog about the Inventions CD.

“Stephen Dodgson won Royal Philharmonic Society prizes for his early compositions, which signalled his emergence as a significant figure in British musical life. Though he composed in most genres he wrote with particular distinction for guitar and harpsichord and his sets of Inventions for harpsichord span a period of almost forty years. Scarlatti remained his inspiration both for rhythmic excitement and for promoting the instrument’s expressive power, and he responded by composing what is amongst the twentieth-century’s finest music for solo harpsichord: idiomatic, richly characterised and deeply satisfying as well as being creatively challenging for the performer.”