A recent review featured in the Gendai Guitar magazine and reflects on the launch concert for the Guitar Chamber Works recording, released last year. 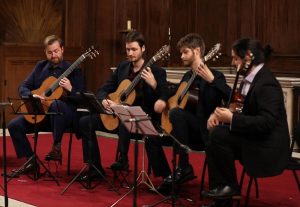 “It is clear that guitar quartets are becoming more and more fashionable and that the repertoire is also increasing with commissions for new pieces, as well as new arrangements for quartet. A CD launch concert was organised by the Mela Guitar Quartet (Matthew Robinson, George Tarlton, Daniel Bovey, and Jiva Housden) with guest performers: the Eden-Stell Guitar Duo, violinist Hartmut Richter, flautist Octavia Lamb, soprano Antonia Gentile, cellist Evva Mizerska and guitarist Michael Butten (playing on an octave bass guitar). The CD is dedicated to the works of Stephen Dodgson and features the same performers as the concert at St James’s Church in Piccadilly. The Stephen Dodgson: Guitar Chamber Works CD (Naxos 8.573762), which was recorded by the renowned sound engineer John Taylor, features Change-Ringers for four guitars, Roundelay for cello and guitar ensemble, six Divertissement for violin and guitar ensemble, Intermezzo for four guitars, Hymnus de Sancto Stephano for soprano and guitar ensemble, Four Poems of John Clare for voice and guitar and The Selevan Story for flute, violin, guitar duo and guitar ensemble.

What always stands out when listening to Stephen Dodgson’s music is the way he writes for each instrument, exploring its sound possibilities, in a unique way. His music is easy to follow but it is never predictable. You can be listening quite happily to pleasant music, such as Change-Ringers for four guitars, when he suddenly brings in a twist of darkness from out of the shadows which grabs hold of you. The Mela Guitar Quartet are sensitive players, who listen to each other carefully and produce a very unified sound, which is also very expressive. Their high level of musicianship makes you forget that you are listening to simply four guitars and carries you into a different sound world. All of the performers gave excellent performances and the concert was a great success.

The list of works in the concert (and on the recording) gives some idea of Stephen Dodgson’s interest in writing for the guitar. The composer was not a guitarist but was connected and attracted to the guitar from his earliest days as a composer. Julian Bream first asked him to write for the guitar in he 1950s, and he continued to write for the guitar throughout his life. He was professor of composition and music theory at the Royal College of Music when John Williams was a young student there, and then wrote his second guitar concerto for John Williams, as well as two solo sonatas. When the flamenco guitarist Paco Peña wrote a Misa Flamenca, Peña asked Stephen Dodgson to help him with the orchestration. Dodgson’s wife, Jane Dodgson is a harpsichord player and this inspired him to write modern works for this ancient instrument also. Stephen Dodgson and his music are held in high esteem and the audience was full of musicians who were a part of his life.”

Read our recent blog for more about the concert including video footage and photos.

Recent reviews of the recording