On 3rd November, an audience gathered full of anticipation at St James’s church, Piccadilly, for the launch concert of the latest recording of Stephen Dodgson works: a complete recording of his guitar chamber works performed by the Mēla Guitar Quartet and friends.

We were treated to a performance of the entire works from the CD and it was fascinating to watch the quartet’s intimate ability to communicate with each other whether playing as a quartet, with soloists or as part of a larger ensemble.

Also joining the quartet were: the brightly-toned and engaging soprano Antonia Gentile who sang Dodgson’s Hymnus de Sancto Stephano with the quartet and Four Poems of John Clare with Dan Bovey on guitar; Evva Mizerska on cello, who also recently recorded Dodgson’s entire works for cello and piano, tonight joining the quartet for his Roundelay; violinist Hartmut Richter who played Dodgson’s Divertissement for violin and guitar and ensemble (the quartet supplemented with bass guitarist Michael Butten) with great vigour; and Octavia Lamb on flute and the Eden Stell Guitar Duo (Mark Eden and Christopher Stell) joined the quartet for the crowning finale, The Selevan Story, which explores the legend of St. Levan (a variant of Selevan), a remote parish in the far west of Cornwall.

The Eden Stell Duo are of particular note as they formed part of the ensemble who recorded the original Selevan Story CD in 1994 and they worked closely with Stephen Dodgson over many years – he wrote his Concerto for Two Guitars and Strings for them. Both they and Stephen Dodgson had a long association with the Prussia Cove (Penzance) International Guitar Seminar, which had resulted in Dodgson writing The Selevan Story. For more about this work and its personal history, see the blog ‘The Story behind The Selevan Story‘ written by guitarist Stephen Gordon who formed part of the ensemble who premiered it. 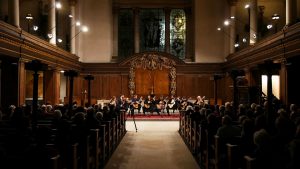 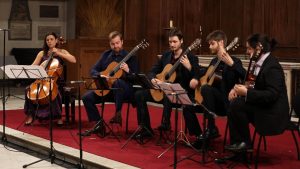 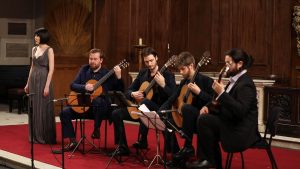 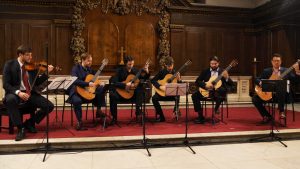 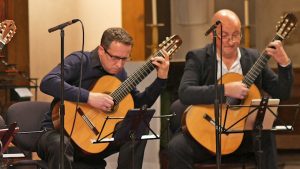 Octavia Lamb, Hartmut Richter and the Eden Stell Duo with the Mēla Guitar Quartet in Dodgson’s The Selevan Story